How to Kill Bitcoin? By Steven Hay

The nearly-indestructible honey badger, famed for its ability to endure venomous snakebites, is Bitcoin’s animal mascot for a good reason. Over the years, Bitcoin has survived so many technical attacks, so much internal strife, and so much outside criticism that it’s gained a reputation for antifragility.

This term, coined by economist Nassim Taleb, is used to describe something that thrives in adverse conditions: “Some things benefit from shocks; they thrive and grow when exposed to volatility, randomness, disorder, and stressors and love adventure, risk, and uncertainty…Antifragility is beyond resilience or robustness. The resilient resists shocks and stays the same; the antifragile gets better.” – Nassim Nicholas Taleb.

From this perspective, perhaps the surest way to kill Bitcoin would be to stop challenging it. However, in a world of fiercely competing currencies—fiat, altcoins, and precious metals—such destructive tranquility seems unlikely. For the foreseeable future, anticipate further attacks and “Bitcoin is dead!” declarations. Attacks on Bitcoin: Past, Present, and Future A few months ago, Reddit user themetalfriend compiled a fairly comprehensive list of attacks on Bitcoin. In case you’re wondering about the “Outcome” column, “HBDGaS” stands for “Honey Badger Don’t Give a S#!%,” referencing a viral video about the animal’s survivability. 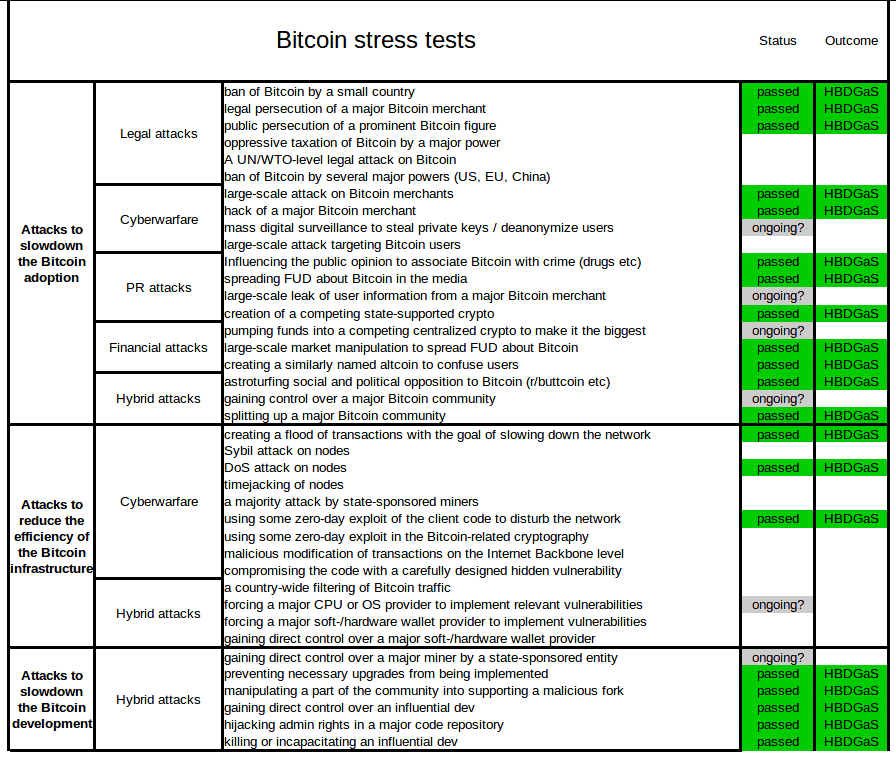 While different categories or additional attacks could be proposed, the list effectively conveys the wide variety of attacks that Bitcoin has endured—as well as some potential future threats.

There are three broad categories of attack, with significant feedback between them:

As you can see, even though there are three different categories, in the end, they’re all connected in their outcomes. Let’s consider these specific attacks in greater detail, including known examples and their counters.